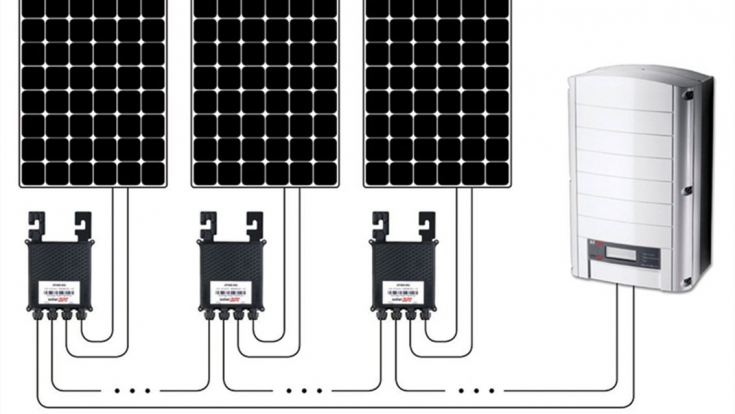 • VEMC provides one of its kind optimized solar solutions focusing mainly on the module optimization by using individual or bi-module solar optimizers.

• Solar optimizer is an electronic DC-DC converter technology which is used to optimize the operation point of the solar photovoltaic or wind turbine systems.

• Solar optimizers are specialized modular devices used on an individual or bi-module level to provide special energy yield boos, monitoring and safety features to the solar

• Solar optimizers are installed on the back of the solar modules using clips and the electrically connected between every module to module connection.

Why Optimizer is Important for Solar Projects:

• Solar PV systems are made by connecting panels in series to form strings, and several of these strings are connected in parallel to form a solar array.

• Due to the series connection of PV modules, the lowest-performing module will impact the performance of the entire plant.

• Kirchhoff’s current law says that in a closed circuit, where all components are connected in series, the flow of current across the components should be the same.

• But in a PV array with a single string connected to an inverter, under certain conditions, some modules can only generate a smaller amount of current because of reasons like, soiling losses, faulty cells, shadowing etc.

• This creates a depression in current flow leading to a smaller current at the inverter input, the optimiser is required to avoid this particular scenario in solar plants.

• The solar optimizers improve the energy output of the PV systems by constantly tracking the maximum power point (MPPT) of the solar modules.

• The solar Optimisers implement the impedance matching and or the predictive IV techniques to increase the solar plant generation over operation life.

• Furthermore, the solar optimizers monitor the performance of each module and communicate performance data to the monitoring platform for enhanced, cost-effective module-level maintenance.

• Each solar optimizer is equipped with the safety feature, which is designed to automatically reduce modules' DC voltage to a safe level whenever the inverter or grid power is shut down (unless connected to a inverter operating in backup mode).